This is a long-term research theme that aims to help people, usually elderly or in difficulty, living alone at home.

The original aim of the RESIDE-HIS project was to detect a state of emergency by sound analysis in the apartment with fusion of information from presence sensors and a fall sensor. The DESDHIS project focused on the recognition of calls for help and the classification of the person’s Activities of Daily Living, a variation in ADLs that could be a sign of an emerging health problem. The Sweet-Home project aimed to voice control home automation equipment in the intelligent apartment to assist frail people, using a specialized social link system between the isolated person and his family. The objective of the CIRDO project was the detection of falls by video analysis and the recognition of distress calls in this case. The VOCADOM project selected by the ANR in 2016 aims to carry out a voice command of home automation under realistic conditions of use: presence of noise in the apartment, presence of a visitor…

See also more details on the site corresponding to each project:

Currently, this project is based on the LIG’s DOMUS apartment (see below) and the Amiqual4Home platform. 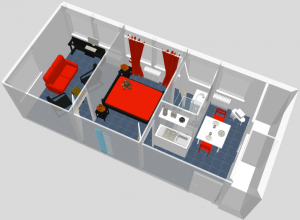